Surfing Facebook has become a daily habit of the internet population. Facebook now has a valuation of $80 billion, and it positioned second to the search engine giant Google, in terms of the traffic statics. As per the latest studies, an average Facebook visitor spends at least 10-45 minutes on the site for their social activities. Facebook has released native mobile applications for iOS (iPhone, iPod Touch, iPad), Android, Windows phone, Symbian( Nokia) and other smartphone platforms.

They also have tie-up with mobile network providers for SMS/ free user access to Facebook mobile portal. All this accounted for tremendous growth of Facebook usage on mobile as well as desktop computers. Are you looking for a Facebook client for your mobile device? Have a look at our list of the official apps for different operating systems. 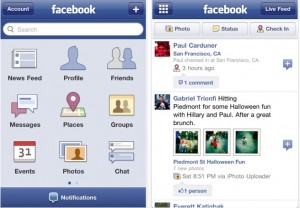 Facebook app for iOS is the best one we have seen so far. They update the application very often and add more features. The Facebook mobile app for iPhone has the following features:

Facebook Mobile is also available for Nokia (Symbian), Samsung and all other Java phones-here

In case your mobile is not in the supported list, still you can access the Facebook mobile  at m.Facebook.com on your web browser. It is pretty fast and takes less data charges.