Android is Linux based mobile operating system developed by Google and Open Handset alliance . Google started development of Android OS from late 2005 after its acquisition of Android Inc . The First android based phone was HTC dream which is also known as T-Mobile G1 in US and Europe .HTC dream was a huge success and about 1 million units were sold as per T mobile statics . The second phone based on Android OS is HTC magic. HTC magic was first introduced at mobile world congress in February 2009 and went on sales from April 2009 . The same HTC Magic is now available in India via Airtel . Airtel was one of the first company to introduce iPhone in India . Similarly now they have the credit of launching the first Android based phone in India by introducing HTC magic . Check out HTC Magic Indian price via Airtel and phone specifications . 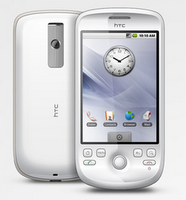 Airtel announced that they will offer 100 MB data download each month to a maximum of 6 months for all qualified HTC magic purchases .
Portfolio Manager, Hello Tune Manager, Weather Channel, Mobshare ( mobile photo sharing) , In-mobile search and City Search are few Airtel enabled services that will be presents in each phone .