Tata Docomo excited the Indian telecom scene by debuting pay per second tariff plans in 2010. As of 2012, they have around 90 million customers in India, and around 45,45 million people are actively using their services. The company now operates its CDMA and GSM sections under Tata Docomo brand and offers high-speed data plans in both segments. Tata Docomo’s parent company Docomo is one of the pioneers in 3G technologies, and in India,India the alliance is among the first private providers to launch 3G enabled services. Tata Docomo owns the 3G license in Kerala, Maharashtra, Gujarat, Punjab, Haryana, Uttar Pradesh, Goa, Rajasthan, Chattisgarh (Madhya Pradesh), Karnataka and the roll-out is almost complete in all major cities of these states. You can either use your mobile phone or a Tata Photon device to access Docomo 3G. With Tata Docomo network and a compatible hardware, you can access 3G at a speed up-to 21.1 Mbps.

Tata Docomo 3G promises an average speed of 7.2 Mbps which is more than the traditional land line broadband speed in India. All newly purchased Tata Docomo SIM cards are 3G equipped and costs 50 RS, but the service should be activated and configured before use.

If you are a new Tata Docomo customer, open your mobile settings and look for connection or network settings. Create an access point Tata Docomo with APN as

TATA.DOCOMO.DIVE.IN and save. Leave the other options as it is. Restart your phone and enjoy 100MB free Tata Docomo 3G for 7 days. You can also get the settings by sending an  SMS “3GLife” (without quotes) to 53333. If you are still experiencing any problem call 18002660000 from your Tata Docomo phone and follow the IVR system. Existing Docomo GPRS users in 3G service areas can access the free 7 day trial without changing any APN settings.

3G cost is a bit cheaper with Tata Docomo Postpaid plans. In both Postpaid and Prepaid, you’ve the option to choose Docomo SmartLife plan or any other data pack according to your need. The Docomo SmartLife plans come with unique voice + 3G offers, and with a data recharge, you get additional 3G usage on your exiting plan and balance. Without any special 3G tariff plan, the normal data rate is 10p/10KB in both postpaid and prepaid. Video call charges to Tata Docomo 3G network in India is five paisa/second. Detailed illustration of Tata Docomo 3G offers in 2012 is given below. 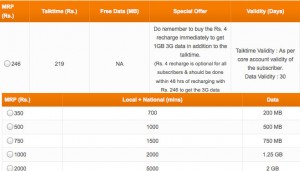 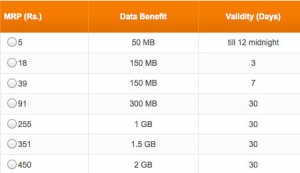 Tata Docomo 3G postpaid plans may appear costly for a normal user but its a bliss for heavy callers and data users. At RS 350 monthly rental, they give double talk time and 200 MB free data. You also have the option to purchase 1GB of data at just 199RS for 30 days.

Those who are buying a new Tata Docomo connection in 2012 may be eligible for specific first time 3G recharges- ask your store agent for more information. Apart from these traditional 3G plans, Tata Docomo has arrangements with Nokia and some other mobile companies for bundled 3G plans with selected devices. Check the official Tata Docomo 3G website for the list of smartphones that come with such offers.