Nokia and all other mobile devices using Symbian OS have an inbuilt recorder software in them. However, this is actually a sound recorder that cannot be used to record live audio calls. Then there is some freeware call recorder software available in the internet that records calls but produces a beep sound at definite intervals. Total Recall mobile call recorder from Killer Mobile is an exception in this case. This app is available for Nokia Symbian, Windows Mobile and Android OS platforms and let record calls without any interfering sounds.

Recording calls is legally not allowed in some states but it is a good practice in private life. We can save these conversations like photos and make use of it from time to time. The recording should be done in such a way that the caller at the other end do not get to know about it. Total Recall is absolutely useful in this regard. 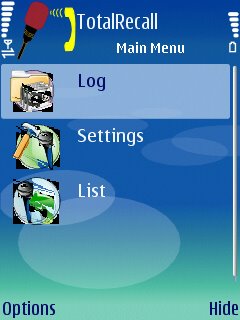 The above shown is the interface for Total Recall sound recorder for Symbian Nokia handsets. It let you record incoming and outgoing calls automatically or manually-by using a hotkey. You can also use it as a voice recorder without any limits. After recording, there is an option email or MMS the recording in AMR or WMV format. Download Total Recall for Nokia Symbian version here.

Android and Windows Mobile editions of the Total Recall are equally impressive. Android version has support for remote SMS based recording, and it supports additional formats 3GPP and MPEG4. You can download the Android call recorder here.

Do you want a call recorder for any specific mobile version or any other OS platform? Let us know that in the comment section.